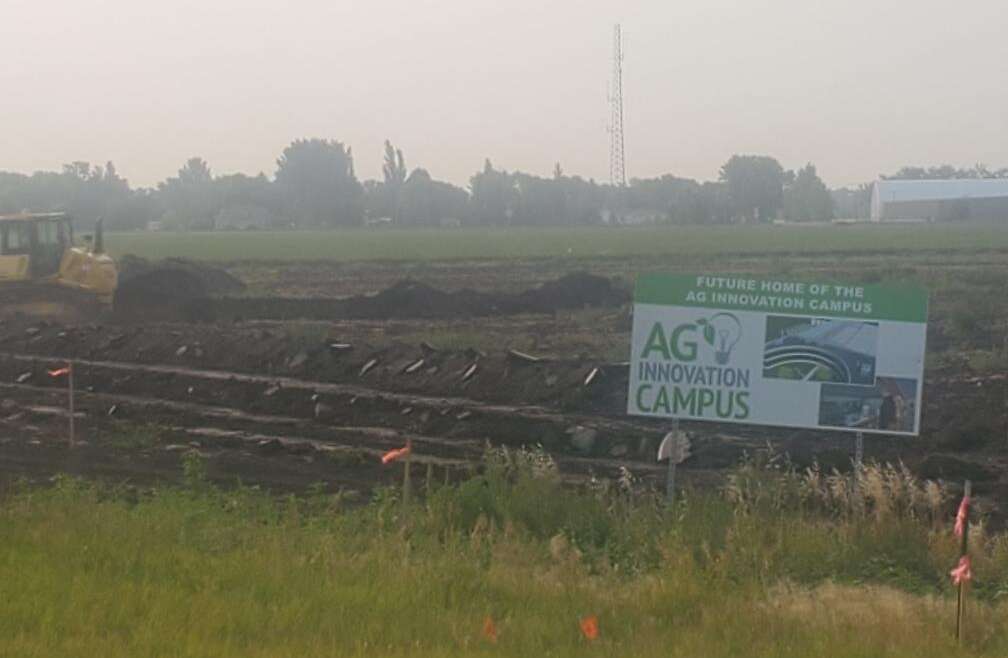 The Ag Innovation Campus dream is beginning to become reality.

“It’s always a good feeling when you get to pushing dirt,” said AIC construction consultant Brian Ruschy, who will be overseeing a team of about 30 workers on the project. “We’re ready to get to work.”

Just a few weeks after bank documents were signed and finalized, site preparation began on the 10-acre site in south Crookston. Dirt started moving in late July as the Campus team prepares to start production in 2022. The first phase of construction will consist of utility work, including sewer and water installation. This initial phase will take several months and is expected to finish this fall. U.S. SiteWork is handling the earth work. The Crookston Housing and Economic Development Authority (CHEDA) also approved funding for a web camera that is documenting the construction progress.

“This is a big moment for the Ag Innovation Campus,” AIC Board Chair Mike Skaug said, who was also recently elected president of the Minnesota Soybean Growers Association. “This first-of-its-kind facility is going to have a lot of benefits toward our state’s economy, with new ventures and new uses for soymeal that will be advantageous to the farm economy.”

The state-of-the-art Campus will host a specialty crushing facility, allowing universities, commodity groups and private seed developers access to affordable processing, designed to lower costs while promoting growth of value-added products. Once established, the Campus will be home to private industries to create products to benefit all parties, from farm gate to consumers. A fully operational AIC will boost the regional ag economy, create dozens of good-paying jobs and crush more than 60,000 tons per year of soybean meal. That will equate to serving about 30% of the Upper Midwest regional market, which consumes about 368 million pounds of soybean meal each year.

Once it’s reached full capacity, the AIC will support three crushing lines. Each line can be operated all on either organic, non-GMO or GM soybeans, as well as separately for each type of soybean. Each line can also be cleaned to avoid cross contamination with other soybean lines. In addition, the AIC anticipates that, in the near future, it will also work on other oil seeds, including cover crops. The AIC will also be ahead of the curve as the first crush plant in the world dedicated to purchasing and selling soybeans based off amino acid value.

“This facility really has the potential to revitalize the ag economy through Minnesota and the region,” AIC board member Trevore Brekken said. “As a farmer in this region, it’s a huge deal to see the Ag Innovation Campus start to come to fruition.”

Through the leadership of farmer-leaders Gene Stoel (also an AIC board members) and Bill Zurn, AIC recently earned a soybean-checkoff funded grant from the United Soybean Board. During Minnesota’s 2021 Legislative Session, lawmakers approved a provision that lifts a weight restriction on trucks hauling soymeal along Highway 2 north of Crookston to the Canadian border. In July, the AIC also made the shortlist of projects Sen. Tina Smith has recommended that receive Congressionally Directed Spending through the American Rescue Plan. The AIC submitted the request following unprecedented material increases due to the COVID-19 pandemic.

“A lot of hard work brought us to this milestone, and it’s a testament to the team we’ve built that we’re able to mark the beginning phase of construction,” said Tom Slunecka, CEO of Ag Management Solutions, which oversees the AIC. “Of course, much more work remains, but we’re very excited with the direction we’re moving in as we plan to begin production next year.”