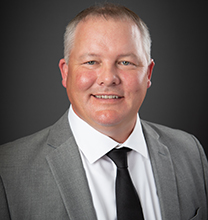 Tom Frisch has served as the Minnesota Soybean Research & Promotion Council’s District 4 representative since 2019. He farms just south of Dumont and grows corn and soybeans with his father and three cousins. Frisch graduated from North Dakota State University in 2000 with a degree in Agricultural Economics before starting his career in farming. After graduating from college, he returned home and started crop consulting and selling seed for the local co-op while helping on the farm. It was not until 2007 when he started farming and renting land from his dad. Off the farm, Frisch has been involved on his township board, Dumont volunteer fire department and the local golf course board of directors. He is also on his first year serving as a director for the Traverse Electric Cooperative. In 2014, Frisch participated in the Council’s See For Yourself mission to Japan and The Philippines. The mission opened his eyes to what our soybeans are being used for overseas and how our checkoff board can make a difference. It showed him the big picture – how our checkoff dollar investments can help the local farmer.